This mani was supposed to be for Friday night but I had a heck of a time with it.  I have never been so frustrated with one before.  I painted on three coats of the white and threw my top coat on and then decided to take a nap because I was going to have a late night.  When i woke up to ATTEMPT the stamping portion of this mani I had sheet marks EVERYWHERE.  :(  I didn't have time to fix it before I had to be at my friends so I just left the white as was.  I ended up fixing the four nails that had sheet marks everywhere the next day.  After they dried I tried to use my cherry stamp but it would not pick the image up off of the plate.  The entire reason I bought this plate was for the cherries.  It is an inside joke between my friend who passed away a few years ago and I so anytime I see cherries I buy them.  I was about to throw in the towel when I realized I had just won a dotting set from Jen's Nail Files on facebook and this was the perfect way to try them out.  This turned out to be one of my favorite manicures, (I think I say this in every post) and I have worn it for two days!  I never wear one longer than a day!

Here is the dotting set that I won.  She threw in a few little surprise gifts too! 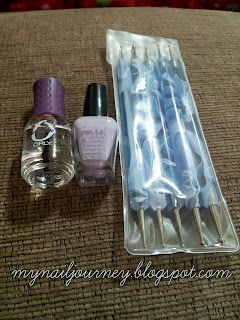 Three coats.  I LOVE this white 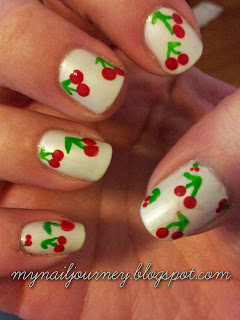 If you look at my pinky you can see that the cherry close to the top of the nail is a lot bigger than the rest of them.  This was the stamp I tried to do but it would only pick up half of the image.  Trust me.  I tried about 15 times to do this and finally gave up.  I used the biggest dotting tool in the set for the cherries and painted the stems on with a brush.

Have you guys had any major stamping flops?  And what about that white.  I just am in love with it.  It is so pearly and ironically enough, it looks exactly like a bottle of shower gel I just purchased the other day.

Posted by Melissa at 4:05 PM No comments: Links to this post